Halite (pronounced /ˈhælaɪt/), commonly known as rock salt, is the mineral form of sodium chloride (NaCl). Halite forms isometric crystals. The mineral is typically colorless or white, but may also be light blue, dark blue, purple, pink, red, orange, yellow or gray depending on the amount and type of impurities. It commonly occurs with other evaporite deposit minerals such as several of the sulfates, halides, and borates.

Halite occurs in vast beds of sedimentary evaporite minerals that result from the drying up of enclosed lakes, playas, and seas. Salt beds may be hundreds of meters thick and underlie broad areas. In the United States and Canada extensive underground beds extend from the Appalachian basin of western New York through parts of Ontario and under much of the Michigan Basin. Other deposits are in Ohio, Kansas, New Mexico, Nova Scotia and Saskatchewan. The Khewra salt mine is a massive deposit of halite near Islamabad, Pakistan. In the United Kingdom there are three mines, the largest of these is at Winsford in Cheshire producing half a million tonnes on average in six months.[1]

Salt domes are vertical diapirs or pipe-like masses of salt that have been essentially "squeezed up" from underlying salt beds by mobilization due to the weight of overlying rock. Salt domes contain anhydrite, gypsum, and native sulfur, in addition to halite and sylvite. They are common along the Gulf coasts of Texas and Louisiana and are often associated with petroleum deposits. Germany, Spain, the Netherlands, Romania and Iran also have salt domes. Salt glaciers exist in arid Iran where the salt has broken through the surface at high elevation and flows downhill. In all of these cases, halite is said to be behaving in the manner of a rheid.

Unusual, purple, fibrous vein filling halite is found in France and a few other localities. Halite crystals termed hopper crystals appear to be "skeletons" of the typical cubes, with the edges present and stairstep depressions on, or rather in, each crystal face. In a rapidly crystallizing environment the edges of the cubes simply grow faster than the centers. Halite crystals form very quickly in some rapidly evaporating lakes resulting in modern artifacts with a coating or encrustation of halite crystals. Halite flowers are rare stalactites of curling fibers of halite that are found in certain arid caves of Australia's Nullarbor Plain. Halite stalactites and encrustations are also reported in the Quincy native copper mine of Hancock, Michigan.

Halite is often used both residentially and municipally for managing ice. Because brine (a solution of water and salt) has a lower freezing point than pure water, putting salt on ice will cause it to melt. Another effect of applying halite to an icy surface covered with water, is that it disrupts the interface in which water molecules are constantly replacing each other from liquid to solid. When NaCl (or other impurities) form a solution with water, part of the interface is blocked, and the crystalline structure of ice emits more water molecules than the liquid water is able to replace. Therefore, the presence of halite in solution with water itself melts ice. It is common for homeowners in cold climates to spread salt on their walkways and driveways after a snow storm to melt the ice. It is not necessary to use so much salt that the ice is completely melted; rather, a small amount of salt will weaken the ice so that it can be easily removed by other means. Also, many cities will spread a mixture of sand and salt on roads during and after a snowstorm to improve traction.

Rock salt may also be used to make ice cream. It is not actually used in the ice cream mixture; rather, it is used to melt the ice surrounding the can holding the ice cream. Melting is an endothermic process, so when the ice melts it absorbs heat from its surroundings to store as latent heat, thus cooling the ice bath and quickening the freezing process. 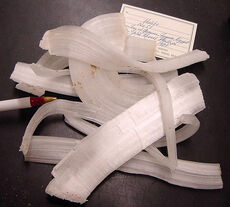 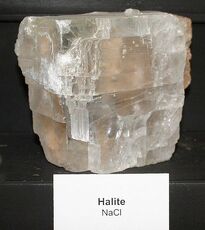 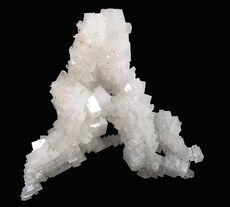 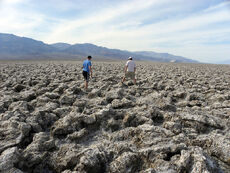 Devil's Golf Course in Death Valley, California. Halite formed by the evaporation of ancient Lake Manly.
Add a photo to this gallery

Retrieved from "https://carlsbad.fandom.com/wiki/Halite?oldid=4948"
Community content is available under CC-BY-SA unless otherwise noted.