This article is about the mineral. For other uses, see Gypsum (disambiguation).

Gypsum is a very soft mineral composed of calcium sulfate dihydrate, with the chemical formula CaSO4·2H2O.[3] It is found in alabaster, a decorative stone used in Ancient Egypt. It is the second softest mineral on the Mohs Hardness Scale.

The word gypsum is derived from the Greek word γύψος gypsos, "chalk" or "plaster".[4] Because the gypsum from the quarries of the Montmartre district of Paris has long furnished burnt gypsum used for various purposes, this material has been called plaster of Paris.

Gypsum was known in Old English as spærstān, spear stone, referring to its crystalline projections. (Thus, the word spar in mineralogy is by way of comparison to gypsum, referring to any non-ore mineral or crystal that forms in spearlike projections.)

Gypsum is moderately water-soluble (~2.0–2.5 g/L at 25 °C)[5] and, in contrast to most other salts, it exhibits a retrograde solubility, becoming less soluble at higher temperatures. As for anhydrite, its solubility in saline solutions and in brines is also strongly dependent on NaCl concentration.[5]

Gypsum occurs in nature as flattened and often twinned crystals and transparent cleavable masses called selenite. Selenite contains no significant selenium; rather both substances were named from the Ancient Greek word for the Moon.

Selenite may also occur in a silky, fibrous form, in which case it is commonly called satin spar. Finally it may also be granular or quite compact. In hand-sized samples, it can be anywhere from transparent to opaque. A very fine-grained white or lightly tinted variety of gypsum is called alabaster, and is prized for ornamental work of various sorts. In arid areas, gypsum can occur in a flower-like form typically opaque with embedded sand grains called desert rose. Up to the size of 11 m long, gypsum forms some of the largest crystals found in nature, in the form of selenite.[7]

Gypsum is a common mineral, with thick and extensive evaporite beds in association with sedimentary rocks. Deposits are known to occur in strata from as far back as the Archaean eon.[8] Gypsum is deposited from lake and sea water, as well as in hot springs, from volcanic vapors, and sulfate solutions in veins. Hydrothermal anhydrite in veins is commonly hydrated to gypsum by groundwater in near surface exposures. It is often associated with the minerals halite and sulfur.

Because gypsum dissolves over time in water, gypsum is rarely found in the form of sand. However, the unique conditions of the White Sands National Monument in the US state of New Mexico have created a Template:Convert/LoffAonDbSon expanse of white gypsum sand, enough to supply the construction industry with drywall for 1,000 years.[9] Commercial exploitation of the area, strongly opposed by area residents, was permanently prevented in 1933 when president Herbert Hoover declared the gypsum dunes a protected national monument.

Gypsum is also formed as a by-product of sulfide oxidation, amongst others by pyrite oxidation, when the sulfuric acid generated reacts with calcium carbonate. Its presence indicates oxidizing conditions. Under reducing conditions, the sulfates it contains can be reduced back to sulfide by sulfate reducing bacteria.

Orbital pictures from the Mars Reconnaissance Orbiter (MRO) indicate the existence of gypsum dunes in the northern polar region of Mars.[10]

Crystals of gypsum up to 11 meters (36 ft) long have been found in the caves of the Naica Mine of Chihuahua, Mexico. The crystals thrived in the cave's extremely rare and stable natural environment. Temperatures stayed at 58 °C (136 °F), and the cave was filled with mineral-rich water that drove the crystals' growth. The largest of those crystals weighs Template:Convert/ST and is around 500,000 years old.[13][14]

Synthetic gypsum is recovered via flue gas desulfurization at some coal-fired electric power plants. It can be used interchangeably with natural gypsum in some applications.

Gypsum also precipitates onto brackish water membranes, a phenomenon known as mineral salt scaling, such as during brackish water desalination of water with high concentrations of calcium and sulfate. Scaling decreases membrane life and productivity. This is one of the main obstacles in brackish water membrane desalination processes, such as reverse osmosis or nanofiltration. Other forms of scaling such as calcite scaling, depending on the water source, can also be important considerations in distillation as well as in heat exchangers where either the salt solubility or salt concentration can change rapidly.

Gypsum is used in a wide variety of applications:

Unusual gypsum specimens from around the world 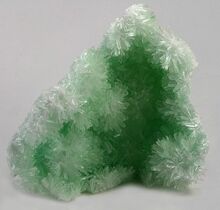 Green Gypsum crystals from Pernatty Lagoon, Mt Gunson, South Australia. Its green color is due to presence of Copper ions. 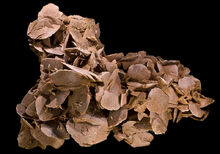 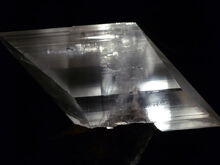 Polished Selenite from the Houston Museum of Natural Science. 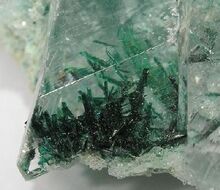 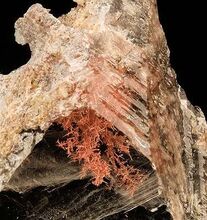 Gypsum with crystalline copper inside. 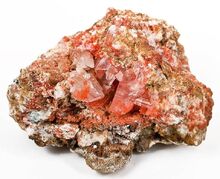 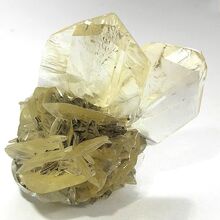 Unusual Selenite Gypsum from the Red River.
Add a photo to this gallery

Retrieved from "https://carlsbad.fandom.com/wiki/Gypsum?oldid=4885"
Community content is available under CC-BY-SA unless otherwise noted.