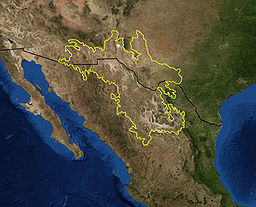 Satellite view with overlaying map of the Chihuahuan Desert

The Chihuahuan Desert is a desert, and an ecoregion designation, that straddles the U.S.-Mexico border in the central and northern portions of the Mexican Plateau, bordered on the west by the extensive Sierra Madre Occidental range, and overlaying northern portions of the east range, the Sierra Madre Oriental. On the U.S. side it occupies the valleys and basins of central and southern New Mexico, Texas west of the Pecos River and southeastern Arizona; south of the border, it covers the northern half of the Mexican state of Chihuahua, most of Coahuila, north-east portion of Durango, extreme northern portion of Zacatecas and small western portions of Nuevo León. It has an area of about 362,000 km2 (139,769 sq mi). It is the third largest desert of the Western Hemisphere and is second largest in North America, after the Great Basin Desert.[1]

Several larger mountain ranges include the Sierra Madre, the Sierra del Carmen, the Sacramento Mountains, the Sandia-Manzano Mountains, the Magdalena-San Mateo Mountains, the Chisos, the Guadalupe Mountains, and the Davis Mountains. These create "sky islands" of cooler, wetter, climates within the desert, and such elevated areas have both coniferous and broadleaf woodlands, and even forests along drainages and favored exposures.

The Chihuahuan Desert is higher in elevation than the Sonoran Desert to the west, mostly varying from 600–1,675 m (1,969–5,495 ft) in altitude. As a result, it tends to have a slightly milder climate in the summer (though usually daytime June temperatures are in the range of 35 to 40 °C (95 to 104 °F)). Winter weather varies from relatively mild to quite cold depending on altitude and the ferocity of northerly winds. Precipitation is somewhat more abundant than most of the southern Great Basin, the Sonoran, and Mojave deserts, however it is still usually less than 254 millimeters (10 in) per year, with much of the rain falling during the "monsoon" of late summer. The mean annual precipitation for the Chihuahuan Desert is 235 mm (9 in) with a range of approximately 150–400 mm (6–16 in). Nearly two-thirds of the arid zone stations have annual totals between 225 and 275 mm (9 and 11 in).[2] Snowfall is scant except at the higher elevation edges.

The Chihuahuan Desert is an ecoregion that has received little exploration and study. Therefore, it has not been classified or had subdivisions applied to it, as has the Sonoran Desert to the west.

There are a few urban areas within the desert: the largest is Ciudad Juárez with almost two million inhabitants, neighboring El Paso; then the city of Chihuahua and Torreón. Albuquerque, Las Cruces and Roswell in New Mexico are among the other significant cities in this ecoregion. Saltillo and Monterrey are located in the border of the Chihuahuan desert.

According to the World Wide Fund for Nature, the Chihuahuan Desert may be the most biologically diverse desert in the world, whether measured on species richness or endemism, although the region has been heavily degraded over time. Many native species have been replaced with Creosote Bush. The Mexican Wolf, once abundant, has been extirpated. The main cause of degradation has been grazing.[3] 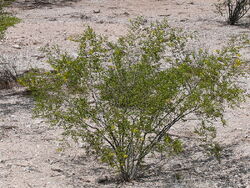 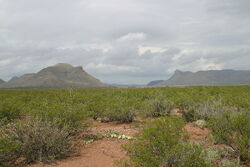 Yucca, Creosote, and Mesquite typify the plants in the Chihuahuan Desert 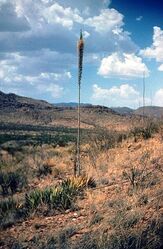 Retrieved from "https://carlsbad.fandom.com/wiki/Chihuahuan_Desert?oldid=4390"
Community content is available under CC-BY-SA unless otherwise noted.