Carlsbad Caverns National Park is a United States National Park in the Guadalupe Mountains in southeastern New Mexico. The primary attraction of the park for most visitors is the show cave, Carlsbad Caverns. Visitors to the cave can hike in on their own via the natural entrance, or take the elevator (the exit for everyone) directly to the Underground Lunchroom some 750 feet below.

The park has two entries on the National Register of Historic Places: The Caverns Historic District and the Rattlesnake Springs Historic District.[1] Approximately two thirds of the park has been set aside as a wilderness area, helping to ensure no future changes will be made to the habitat.

Peak visitation typically occurs on the weekends following Memorial Day and the Fourth of July. The park entrance is located on US Highway 62/180 approximately 18 miles (29 km) southwest of Carlsbad, New Mexico. The park participates in the Junior Ranger Program.[2]

For detail on the area's geology, see Delaware Basin.

From a young age, Jim White explored the caverns with his homemade wire ladder. When he grew older, most people did not even believe such caves existed. He gave many of the rooms their names, including the Big Room, New Mexico Room, King's Palace, Queen's Chamber, Papoose Room, and Green Lake Room. He also named many of the cave's more prominent formations, such as the Totem Pole, Witch's Finger, Giant Dome, Bottomless Pit, Fairyland, Iceberg Rock, Temple of the Sun, and Rock of Ages.

The town of Carlsbad, which lends its name to the Caverns and National Park, is in turn named after the Czech town formerly known by the German name Karlsbad (modern spelling Carlsbad) and now known by the Czech name Karlovy Vary, both of which mean "Charles' Bath[s]."

Until 1932, visitors to the cavern had to walk down a switch back ramp-sidewalk that took them 750 feet below the surface. The walk back up was hard on a lot of visitors. In 1932 the National Park opened up a large visitor center building that contained two elevators that would take visitors to the caverns below. The new center included a cafeteria, waiting room, museum and first aid area. [4]

Balloon Ballroom
Located in the ceiling above the main entrance hall, this small room was first accessed by tying a rope to a whole bunch of balloons and floating them up into the passage.

Bat Cave
A large, unadorned rocky passage connected to the main entrance corridor. The majority of the cave's bat population lives in this portion of the cave, which was mined for bat guano in the early 20th century.

Bell Cord Room
Named for a long, narrow stalactite coming through a hole in the ceiling, resembling the rope coming through a church steeple to ring the bell. This room is located at the end of the Left Hand Tunnel.

Bifrost Room
Discovered in 1982, it is located in the ceiling above Lake of the Clouds. Its name refers to a Norse myth about a world in the sky that was accessed from Earth by a rainbow. The room was given this name because of its location above the Lake of the Clouds and its colorful oxide-stained formations.

Chocolate High
A maze of small passages totalling nearly a mile in combined length, discovered in 1993 above a mud-filled pit in the New Mexico Room known as Chocolate Drop.

Green Lake Room
The uppermost of the "Scenic Rooms", it is named for a deep, malachite-colored pool in the corner of the room. In the 1940s, when the military was testing the feasibility of Carlsbad Cavern as an emergency fallout shelter, the Green Lake was used to look for ripples caused by a nuclear bomb test many miles away. None appeared.

Guadalupe Room
Discovered by a park ranger in 1966, this is the second largest room in Carlsbad Caverns. It is known for its dense collection of "soda straw" stalactites.

King's Palace
The first of four chambers in a wing known as the "scenic rooms", it is named for a large castle-like formation in the center of the room.

Lake of the Clouds
The lowest known point in the cave. It is located in a side passage off the Left Hand Tunnel. It is named for its large lake containing globular, cloud-like rock formations that formed under water when the lake level was much higher.

Left Hand Tunnel
A long, straight passage marked by deep fissures in the floor. These fissures are not known to lead anywhere. The Left Hand Tunnel leads to the Lake of the Clouds and the Bell Cord Room.

Mabel's Room
A moderate-sized room located past the Talcum Passage in Lower Cave.

Mystery Room
A large, sloping room located off the Queen's Chamber, named for an unexplained noise heard only here.

New Mexico Room
Located adjacent to the Green Lake Room and accessed by means of a somewhat narrow corridor.

New Section
A section of fissures east of the White Giant formation and paralleling the Bat Cave. New discoveries are still being made in this section.

Papoose Room
Located between the King's Palace and Queen's Chamber.

Queen's Chamber
Widely regarded as the most beautiful and scenic area of the cave. Jim White's lantern went out in this chamber while he was exploring, and he was in the dark for over half an hour.

Spirit World
Located in the ceiling of the Big Room at its highest point (an area known as the Top of the Cross), this area is filled with white stalagmites that resembled angels to the room's discoverers.

Talcum Passage
A room located in Lower Cave where the floor is coated with gypsum dust.

The Rookery
One of the larger rooms in Lower Cave. A large number of cave pearls are found in this area.

Underground Lunchroom
Located in the Big Room at the head of the Left Hand Tunnel. It contains a cafeteria that was built in the 1950s, and is where the elevators from the visitor center exit into the cave.

In 1985 a very distinctive method of exploration was invented. In a dome area 255 feet (77.7 m) above the Big Room floor not far from the Bottomless Pit, a stalagmite leaned out. Using a balsa wood loop with helium-filled balloons attached, the explorers—after several tries over several years—floated a lightweight cord that snagged the target stalagmite. Once the cord was in position up, over, and back to the ground, a climbing rope was pulled into position, and the explorers ascended into what they named The Spirit World.[12] A similar, smaller room was found in the main entrance corridor, and was named Balloon Ballroom in honor of this technique.

In 1993, a series of small passages totaling nearly a mile in combined length was found in the ceiling of the New Mexico Room. Named "Chocolate High", it was the largest discovery in the cave since the Guadalupe Room was found in 1966.

The Bottomless Pit was originally said to have no bottom. Stones were tossed into it, but no sound of the stones striking the bottom was heard. Later exploration revealed that the bottom was about 140 feet (40m) deep and covered with soft dirt. The stones made no sound when they struck the bottom because they were lodged in the soft soil.

The park contains 116 caves.[13] The only other one open to the public is Slaughter Canyon Cave, which also has striking rock formations. No paving or lighting has been installed, and visitors may enter only on guided tours with a ranger.[14]

Lechuguilla Cave, discovered in 1986, is the focus of much current cave exploration at the park. It has been mapped to a depth of 1600 feet, making it the deepest limestone cave in the U.S. The entrance is in an old mining pit called Misery Hole in an obscure corner of the park. It is not accessible to the general public, and the exact location of Misery Hole is kept relatively hidden in an attempt to preserve the cave undisturbed.

Seventeen species of bats live in the park, including a large number of Mexican Free-tailed Bats.[15] It has been estimated that the population of Mexican Free-tailed Bats once numbered in the millions but has declined drastically in modern times. The cause of this decline is unknown but the pesticide DDT is often listed as a primary cause. Populations appear to be on the increase in recent years but are nowhere near the levels that may have been historically present. A study published in 2009 by a team from Boston University questions whether large numbers of bats were ever present at the caverns.[16]

Many techniques have been used to estimate the bat population in the cave. The most recent and most successful of these attempts involved the use of thermal imaging camera to track and count the bats.[17] A count from 2005 estimated a peak of 793,000.[15]

The Mexican Free-tailed Bats are present from April or May to late October or early November.[18] They emerge in a dense group, corkscrewing upwards and counterclockwise, usually starting around sunset and lasting about three hours.[19] (Jim White decided to investigate the caverns when he saw the bats from a distance and at first thought they were a volcano or a whirlwind.)[20] Every early evening from Memorial Day weekend to mid October (with possible exceptions for bad weather), a ranger gives a talk on the bats while visitors sitting in the amphitheater wait to watch the bats come out.[18]

Three hiking trails and an unpaved drive provide access to the desert scenery and ecosystem.

A detached part of the park, Rattlesnake Springs Picnic Area, is a natural oasis with landscaping, picnic tables, and wildlife habitats. As a wooded riparian area in the desert, it has a remarkable variety of birds—over 300 species have been recorded[21]—which makes it "the unofficial Mecca of New Mexico birders". (About 500 species have been recorded in the whole state of New Mexico.)[22] The National Audubon Society has designated Rattlesnake Springs an Important Bird Area (IBA). The natural entrance to the caverns is also an IBA because of its colony of Cave Swallows, possibly the world's biggest.[21] 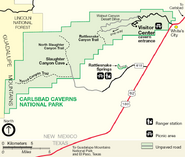 Switchback trail into the natural entrance of the cave

Flowstone, a form of travertine

Closeup of stalagmites in Big Room 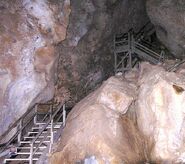 Some of the oldest stairs in the caves

Community content is available under CC-BY-SA unless otherwise noted.
Advertisement