Calcite is a carbonate mineral and the most stable polymorph of calcium carbonate (CaCO3). The other polymorphs are the minerals aragonite and vaterite. Aragonite will change to calcite at 380-470 °C[1], and vaterite is even less stable.[citation needed]

Calcite crystals are trigonal-rhombohedral, though actual calcite rhombohedra are rare as natural crystals. However, they show a remarkable variety of habits including acute to obtuse rhombohedra, tabular forms, prisms, or various scalenohedra. Calcite exhibits several twinning types adding to the variety of observed forms. It may occur as fibrous, granular, lamellar, or compact. Cleavage is usually in three directions parallel to the rhombohedron form. Its fracture is conchoidal, but difficult to obtain.

It has a defining Mohs hardness of 3, a specific gravity of 2.71, and its luster is vitreous in crystallized varieties. Color is white or none, though shades of gray, red, orange, yellow, green, blue, violet, brown, or even black can occur when the mineral is charged with impurities.

Calcite, like most carbonates, will dissolve with most forms of acid. Calcite can be either dissolved by groundwater or precipitated by groundwater, depending on several factors including the water temperature, pH, and dissolved ion concentrations. Although calcite is fairly insoluble in cold water, acidity can cause dissolution of calcite and release of carbon dioxide gas. Calcite exhibits an unusual characteristic called retrograde solubility in which it becomes less soluble in water as the temperature increases. When conditions are right for precipitation, calcite forms mineral coatings that cement the existing rock grains together or it can fill fractures. When conditions are right for dissolution, the removal of calcite can dramatically increase the porosity and permeability of the rock, and if it continues for a long period of time may result in the formation of caverns, most notably the Snowy River Cave in Lincoln County, New Mexico.

The largest documented single crystals of calcite originated from Iceland, measured 7×7×2 m and 6×6×3 m and weighed about 250 tons.[4][5]

Calcite is the primary mineral in metamorphic marble. It also occurs as a vein mineral in deposits from hot springs, and it occurs in caverns as stalactites and stalagmites.

Calcite may also be found in volcanic or mantle-derived rocks such as carbonatites, kimberlites, or rarely in peridotites. Lublinite is a fibrous, efflorescent form of calcite.[6]

Calcite is often the primary constituent of the shells of marine organisms, e.g., plankton (such as coccoliths and planktic foraminifera), the hard parts of red algae, some sponges, brachiopods, echinoderms, most bryozoa, and parts of the shells of some bivalves (such as oysters and rudists). Calcite is found in spectacular form in the Snowy River Cave of New Mexico as mentioned above, where microorganisms are credited with natural formations. Trilobites, which are now extinct, had unique compound eyes. They used clear calcite crystals to form the lenses of their eyes.

Calcite seas existed in Earth history when the primary inorganic precipitate of calcium carbonate in marine waters was low-magnesium calcite (lmc), as opposed to the aragonite and high-magnesium calcite (hmc) precipitated today. Calcite seas alternated with aragonite seas over the Phanerozoic, being most prominent in the Ordovician and Jurassic. Lineages evolved to use whichever morph of calcium carbonate was favourable in the ocean at the time they became mineralised, and retained this mineralogy for the remainder of their evolutionary history.[7] Petrographic evidence for these calcite sea conditions consists of calcitic ooids, lmc cements, hardgrounds, and rapid early seafloor aragonite dissolution.[8] The evolution of marine organisms with calcium carbonate shells may have been affected by the calcite and aragonite sea cycle.[9] 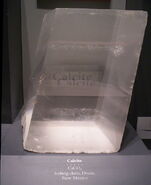 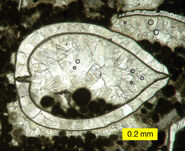 Thin section view of calcite crystals inside a recrystallized bivalve shell in a biopelsparite. 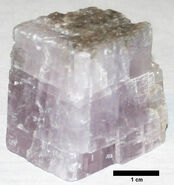 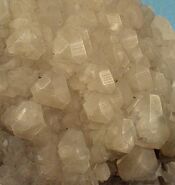 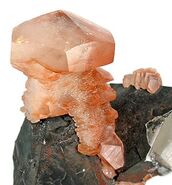 Reddish rhombohedral calcite crystals from China. Its red color is due to the presence of iron.
Add a photo to this gallery

Retrieved from "https://carlsbad.fandom.com/wiki/Calcite?oldid=4932"
Community content is available under CC-BY-SA unless otherwise noted.