[1][2][3] Aragonite is a carbonate mineral, one of the two common, naturally occurring, crystal forms of calcium carbonate, CaCO3 (the other form is the mineral calcite). It is formed by biological and physical processes, including precipitation from marine and freshwater environments.

Aragonite's crystal lattice differs from that of calcite, resulting in a different crystal shape, an orthorhombic system with acicular crystals. Repeated twinning results in pseudo-hexagonal forms. Aragonite may be columnar or fibrous, occasionally in branching stalactitic forms called flos-ferri ("flowers of iron") from their association with the ores at the Carinthian iron mines.

The type location for aragonite is Molina de Aragón (Guadalajara, Spain), 25 km from Aragon for which it was named in 1797.[1] An aragonite cave, the Ochtinská Aragonite Cave, is situated in Slovakia. In the USA, aragonite in the form of stalactites and "cave flowers" (anthodite) is known from Carlsbad Caverns and other caves. Massive deposits of oolitic aragonite sand are found on the seabed in the Bahamas.

Aragonite forms naturally in almost all mollusk shells, and as the calcareous endoskeleton of warm- and cold-water corals (Scleractinia). Because the mineral deposition in mollusk shells is strongly biologically controlled, some crystal forms are distinctively different from those of inorganic aragonite. In some mollusks, the entire shell is aragonite; in others, aragonite forms only discrete parts of a bimineralic shell (aragonite plus calcite). Aragonite also forms in the ocean and in caves as inorganic precipitates called marine cements and speleothems, respectively. The nacreous layer of the aragonite fossil shells of some extinct ammonites forms an iridescent material called ammolite. Ammolite is primarily aragonite with impurities that make it iridescent and valuable as a gemstone.

Aragonite is metastable and is thus commonly replaced by calcite in fossils. Aragonite older than the Carboniferous is essentially unknown.[4]

Aragonite is thermodynamically unstable at standard temperature and pressure, and tends to alter to calcite on scales of 107 to 108 years. The mineral vaterite, also known as μ-CaCO3, is another phase of calcium carbonate that is metastable at ambient conditions typical of Earth's surface, and decomposes even more readily than aragonite. 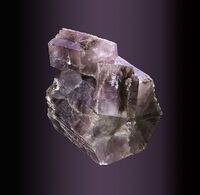 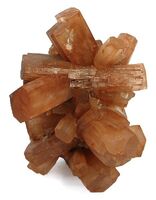 Cluster of twinned aragonite from Morocco

Retrieved from "https://carlsbad.fandom.com/wiki/Aragonite?oldid=4906"
Community content is available under CC-BY-SA unless otherwise noted.